By Peter Morley (published in Old Bike Mart in June 2018)

Motorbikes first came into my life in the early fifties, when my dad got a job, twenty-five miles from home; It was his first proper job after the war. The bike was a 175cc Excelsior and I remember it seeming very fine to me.
Like many of OMB readers, I imagine, I am a Baby-boomer, born the year after Dad came home, got his de-mob suit and started to rebuild a life. He and been a professional ice skater before the war but there wasn’t much call for that in 1945 and he took whatever work he could get: hotel porter, labourer or handyman. We lived in an old tin hut on a war-time airfield at Holmsley in the New Forest, and in other make-shift accommodation, including a converted bus that had been used as a mobile morgue during the war. Eventually, the government’s social programme brought us a council flat. Dad got a job in the oil refinery, and hence the bike. Things were really looking up and it wasn’t long before we graduated to a motorbike and sidecar. It was just wonderful when we had family transport – a 1952 AJS Model 18 and an open plywood sidecar. We visited family and even went on holiday to Dorset with an ex-WD duck canvas tent. The sun always shone during those years. 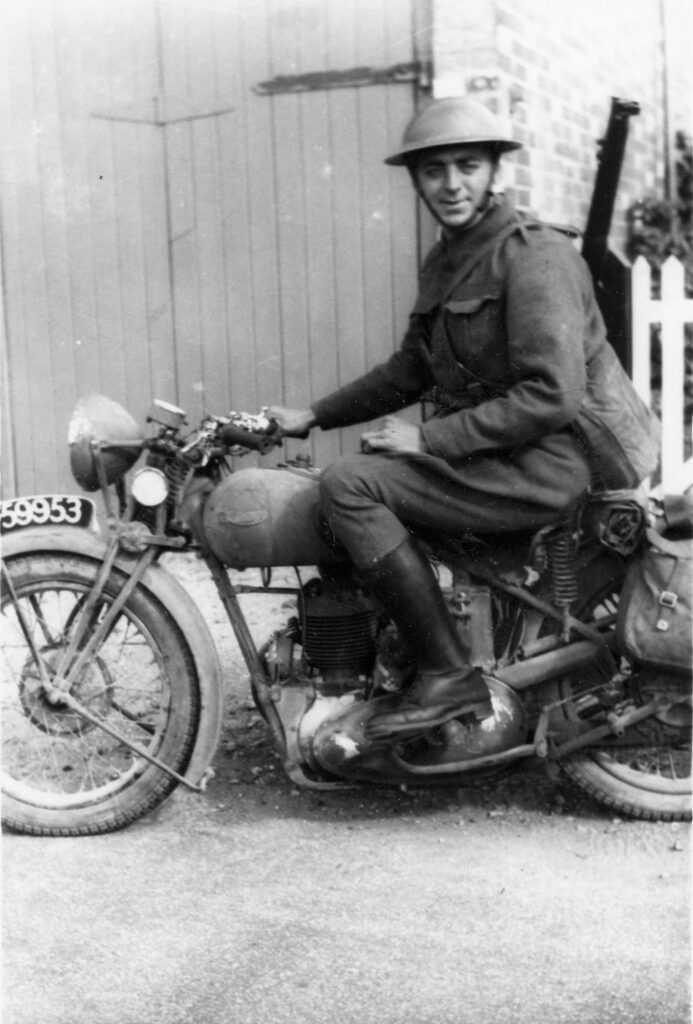 I generally rode pillion. The bike had a rigid rear-end and, inexplicably, a dual seat; not comfortable at all. Dad kitted us out with Ex-WD tank suits. I had a second-hand Corker, but Dad always rode in a flat cap. We picked up other wonders in the Ex-Army shop, including tank aerials to make twelve-foot long fishing rods. Also acquired was a pair of ex-RAF flying boots. They were sheepskin lined but made of a sort of suede that acted as a sponge when it rained. They were discarded in favour of wellies and seaman’s socks.

I have wonderful memories of the Army Surplus store and the trips we made on the outfit. Dad seemed very happy up-front powering his AJ’ along the lanes. He had been a dispatch rider for his six years’ war service and I could often catch him singing the song of his unit, “Here we are, we’re 88DR. Rain or shine, we’re always there on time, we keep riding and riding along.” I can’t remember more, perhaps there were verses he censored for civilians. I have a nice picture, captioned “Satan’s Cavalry”, of 88DR training in 1939. Dad gradually shared a few stories with me during relaxed moments and it was clear that not many of Satan’s Cavalry kept “Riding and riding along.” Dad said there were twenty-two of them but only five came home.
The AJ’ was our family transport until I was sixteen, when we moved up to a hand-painted minivan. Dad taught me to ride the combo – and then gave it to me. I still remember scary moments on my first outing alone on the combo when I met a left-hand at the bottom of a fairly steep hill. I soon learned to respect the bike and learned the confidence to power it round those left-handers.
Dad had also provided me with a lurcher by then and, with a ferret to help, the AJ’ outfit enabled us to catch rabbits all over the New Forest. I left school. “Get a trade, son,” I was told, and I became an engineering apprentice in the refinery – on £260 a year. After two quid a week to Mum for my keep, I had money. I learned to drink – Watney’s mild at 1s 7d a pint – and made friends with other motorcyclists (I don’t think we called ourselves bikers in those days). A couple of years of saving enabled the purchase of a 1960 Matchless G9, almost new it seemed, for £80. Initially, I coupled it up to the sidecar – I still had the dog and enjoyed a bit of rabbiting. Also, the outfit serve well for Saturday night outing with a couple of mates. The dog eventually expired, and I became a solo rider. Some of the lads had decent bikes: Dommie, Road Rocket – and Bob trying to keep up on his Triumph 21. As I remember it, he did quite well. We did the Dragon Rally, Isle of Man and some of those trips to the seaside. I met a nice girl who enjoyed riding pillion.
Dad and the AJ’ have been gone a long time now. I have another G9 (an AJS Model 20 actually) and I thought it might be nice to acquire a 1939 Triumph 3SW like the one Dad left behind at Dunkirk. I was looking out for one and somehow bought a 1928 side-valve Triumph, an NSD. This is a good project while I continue to look for the army Triumph. The girl doesn’t ride pillion any more but encourages me to spend time in the workshop.